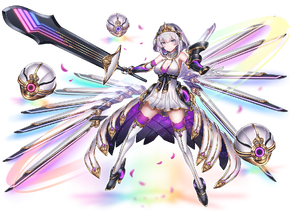 She Who is Progenitor to All Machines Arge is a black ancient magic machine soldier.

In Irish mythology, Dian Cécht (Old Irish pronunciation [dʲiːən kʲeːxt]; also known as Cainte or Canta) was the god of healing, the healer for the Tuatha Dé Danann, and son of the Dagda according to the Dindsenchas.
Wikipedia

In Irish mythology, Miach (Irish pronunciation: [mʲiːəx]) was a son of Dian Cecht of the Tuatha Dé Danann. He replaced the silver arm his father made for Nuada with an arm of flesh and blood; Dian Cecht killed him out of jealousy for being able to do so when he himself could not.
Wikipedia