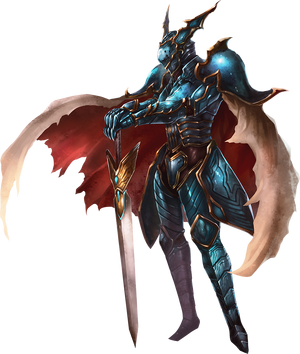 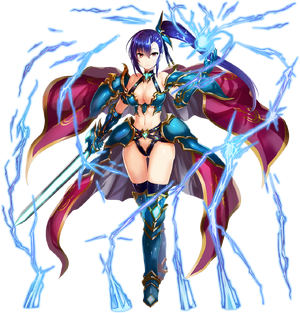 Black Knight of the Thunderclap Arietta is a sapphire dark fighter.

0% I...won't make the same mistake twice.
15% This armor is a testament to the sins I've committed...
30% Once again...it's an honor to be fighting alongside the Prince.
50% To think that the day I could return to the Kingdom has finally come...I'm getting a little emotional.
60% My sword skills are...inherited from my deceased mother.
80% Although my father isn't the very serious type, I still respect him.
100% My life...I'll dedicate it all to the Prince.
130% 王子のためならば、この剣も、この身も、命さえも⋯⋯。
150% 共に歩んでも、良いのでしょうか。あなたの剣であり続けても⋯⋯。
Adjutant No matter what your orders may be, I won't cease to be your sword and shield.

As I walked down a corridor, I came across a person clad in a crude set of armor. It was Arietta.

With the exterior of jet-black armor covering even her face, it's hard to imagine finding anyone who knows of the past of the girl underneath that very armor.

Arietta: "Do you need anything, Prince?"

As far as I'm aware, this girl always conducts her patrols and training within the Castle and its outskirts.
I wonder if she's even gotten any rest...?

Don't push yourself so hard, I advised her involuntarily.

Arietta: "I can at least do this much."

Arietta: "...After betraying the Prince once, this is the least I can do to atone for my sins..."

I couldn't tell her expression from the helmet covering her face, but I could pick up feelings of regret from the tone of her voice.

You don't have to worry about that at all.
We've already re-established that bond of friendship we had in the past.

...That was what I wanted to say, but I could tell that she was serious.
Even if I said that, would those words really reduce the burden on her heart...?

If I made it worse, she would only end up feeling even more responsible for her past.

After saying that, Arietta bowed lightly. She was about to return back to her patrol duties, when-

Hey Arietta, I blurted out.

Arietta stopped right in her tracks, and her helmet-covered face slowly turned to face me.

Arietta: "Hmm? Is anything the matter, Prince?"

In actuality, that armor only had light scratches, and although she did not seem to be in any visible pain, I continued to talk.

Constantly doing your patrols while wearing that armor...
Don't you think that causes it to get worn out faster?

I guess I was worried that her worn-out armor might affect the rate at which she conducts her patrols...

I know that she's a stubborn girl who won't necessarily stop wearing it even if I told her to, but I do wonder...

If she at least wore that armor less frequently, or switched to a lighter version of that armor...

...Would that reduce the physical burden on her somewhat?

...Did she really understand?

Arietta: "Please ask Sandy-dono to make me more of the same set of armor, so that I can rotate between wearing them!"

Arietta, after coming to a completely misguided conclusion, suddenly stopped.

Does she really want to wear that armor so much...?

She could at least conduct her patrols in a lighter set of armor...

Arietta: "I understand the meaning behind your words, Prince."

Arietta: "However, there's a reason why I chose to wear this armor."

Arietta: "Having already betrayed the Prince once, wearing this armor is nothing more than punishment for the sins I've committed."

Arietta: "That's the purpose of this armor."

Even though her father Vargas died as such an irresponsible and unreliable man...
How on earth did he raise his daughter to be as serious-minded as she is now?

Arietta: "I'll say this firmly, but if you're expecting me to be as carefree as my father was in this set of armor..."

Arietta: "As his relative, I have to apologize."

I wasn't even asking for half...
If you had even ten percent of Vargas's irresponsible personality...
I wonder how you would have turned out...

But, anyway, this operation appears to be a failure.

Having said that though, as her superior, I can't afford to give up here.

I decided to try a new angle of approach.

Arietta: "Yes, do you still need anything?"

Walking around with that sinister-looking armor really scares off little children, you know?

She apparently didn't think so.

Well, in justification, there were others apart from her who were clad in armor, not to mention that there were even fiercer-looking Ryujin striding around the area.

Arietta doesn't seem to be afraid of them, though.

Arietta: "Although I feel that having a degree of intimidating aura is necessary for patrolling, it completely slipped my mind that there were people of various ages in the Prince's army."

Arietta: "Thank you for your advice."

After saying that, Arietta bowed back.

I was a little anxious that she wouldn't get it, but, well, this seems to be an improvement at least.

Seeing the back of the one covered in jet-black armor growing more distant, I exhaled gently.

I started seeing an awkwardly-dressed Arietta patrolling the castle.

--Whatever she does, she always does it to the extreme.

Now that I think about it, I haven't actually enquired about Arietta's mother before.
Although seeing how sensitive of a topic it was, I wouldn't mind if she kept quiet about it either.

Arietta: "As you can already imagine, my mother has long since passed away."

Arietta: "When I was still a child, my mother was a knight in the country my father served at prior to coming here."

That's right, I recall Vargas serving in another country a long time ago...

Thinking back, Arietta's battle style didn't match that of her father's in the slightest.
Perhaps it was her mother's style that had some sort of an influence on her...?

Arietta: "Indeed, you're quite right. My swordsmanship is based off my mother's."

Arietta: "Although in actuality, I haven't even reached half of her level yet..."

If what Arietta said was true...Just how strong was her mother, I wonder?

Arietta: "My mother was the strongest knight in the country."

Arietta: "Even though my father was second only to her, the difference in power was simply immeasurable"

Arietta: "Well...As her daughter, this is what she told me previously."

Arietta: "Even if my father were to propose to her, she would never forgive herself for surrendering her body to someone weaker than her."

When I touched Arietta's chest previously, I felt like I had been told something similar already...
Similar to her mother, huh...?

Arietta: "I do believe it was the....thousandth fight?"

That Vargas...So even he displayed that level of stubbornness...

Arietta: "After 999 defeats, he finally emerged victorious on the thousandth fight."

Arietta: "It wasn't a pretty fight at all."

Arietta: "My mother was running a high fever, and my father finally won after setting up dozens of traps on the battlefield..."

Arietta: "Still, a defeat is a defeat. As promised, my mother started going out with my father, and here I am now."

Arietta: "...I do wonder when I first heard this story."

What a commendable level of persistence...

Arietta: "When she first told me about it, she was always laughing."

Arietta: "Perhaps she originally hated him...?"

That's probably the case.
In the first place, was a thousand battles truly enough to satisfy him...?

Arietta: "When the country my father served fell into ruin, my mother passed away."

Arietta: "In his dying moments, our king gave my father and I one final order. It was none other than to 'live'..."

Arietta: "Despite being aware of the shame that it would bring, we made the decision to flee anyway."

Arietta: "I arrived in this country intending to serve the Prince..."

Arietta: "I wanted to clear away any doubts or regrets my mother had..."

Arietta: "Consequently, I tried to protect the Prince to the best of my abilities, but-"

Arietta: "-In the end, I was simply not strong enough."

That's not true at all.
Arietta did what she could.

Arietta: "On the contrary, I even betrayed the Prince..."

I'm well aware of Arietta's unwavering will with regards to protecting the people,
as well as the struggles she's faced because of my actions.

Despite all that, I'm still alive.
So I won't let her claims of "failing to protect me" come to pass.
As a matter of fact, we can even begin fighting alongside each other from now on.

Arietta: "The Prince is as much of a smooth-talker as ever..."

I can't help it since it's my personality.
You know all too well, right?

Arietta: "This time, I won't ever leave your side."

Arietta: "-I swear that I'll protect you for as long as I live."

Saying this with determination-filled eyes,
I shook Arietta's hand with a smile. 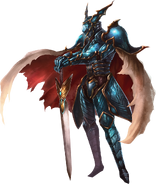 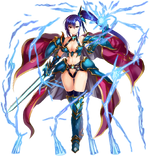 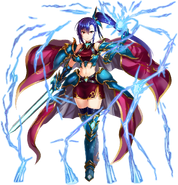 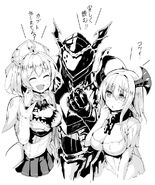 Fanart by original artist E-do
Add a photo to this gallery
Retrieved from "https://aigis.fandom.com/wiki/Arietta?oldid=172203"
Community content is available under CC-BY-SA unless otherwise noted.