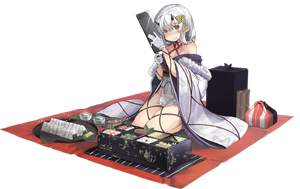 Yama-uba Azumi is a platinum chef.

Yamauba (山姥 or 山うば), Yamamba or Yamanba are variations on the name of a yōkai found in Japanese folklore. Depending on the text and translator, the Yamauba appears as a monstrous crone, "her unkempt hair long and golden white ... her kimono filthy and tattered", with cannibalistic tendencies. In one tale a mother traveling to her village is forced to give birth in a mountain hut assisted by a seemingly kind old woman, only to discover, when it is too late, that the stranger is actually Yamauba, with plans to eat the helpless Kintarō.
Wikipedia

Kaiseki (懐石) or kaiseki-ryōri (懐石料理) is a traditional multi-course Japanese dinner. The term also refers to the collection of skills and techniques that allow the preparation of such meals and is analogous to Western haute cuisine. There are two kinds of traditional Japanese meal styles called kaiseki or kaiseki-ryōri. The one referred to in her AW Ability is written as "懐石料理", and refers to the simple meal that the host of a chanoyu gathering serves to the guests before a ceremonial tea, and is also known as cha-kaiseki (茶懐石).
Wikipedia