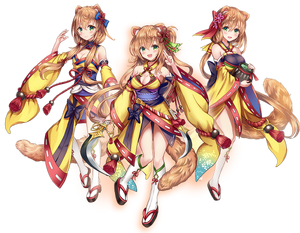 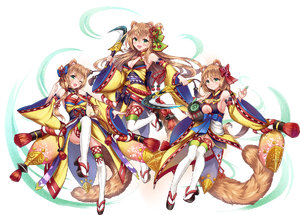 Tagorihime, Tagitsuhime, and Ichikishimahime are three female kami produced as a result of the trial by pledge (ukei) between Amaterasu and Susanoo. The three became known as the "three goddesses of Munakata" as a result of their enshrinement and worship at the shrine Munakata Taisha by the Munakata clan, and are thus believed to have been sea deities or tutelaries of travel on the Genkai Sea.

Tsujigiri (辻斬り, Crossroads Killing), refers to someone (typically a samurai) killing an innocent passerby in order to test a new sword.

Kamaitachi (鎌鼬) is a Japanese yōkai often told about in the Kōshin'etsu region and can also refer to the strange events that this creature causes. They appear riding on dust devils and they cut people using the nails on both their hands that are like sickles. One would receive a sharp, painless wound. In Hida, in the Niu River basin, they are said in legends to be a company of 3 evil gods and the first god would knock down the person, the next god would cut with a blade and the third god would put some medicine on it which is why there is no bleeding or pain.
Wikipedia 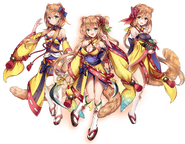