The Hecatoncheires (Greek: Ἑκατόγχειρες Hekatonkheires 'Hundred-Handed Ones'), also called the Centimanes /ˈsɛntɪˌmeɪnz/ (Latin: Centimani) or Hundred-Handers, were figures in an archaic stage of Greek mythology, three giants of incredible strength and ferocity that surpassed all of the Titans, whom they helped overthrow. Their name derives from the Greek ἑκατόν (hekaton, "hundred") and χείρ (cheir, "hand"), "each of them having a hundred hands and fifty heads" (Bibliotheca 1.1). Hesiod's Theogony (624, 639, 714, 734–35) reports that the three Hecatoncheires became the guards of the gates of Tartarus. The Hundred-Handed-Ones are "giants" of great storms and hurricanes. 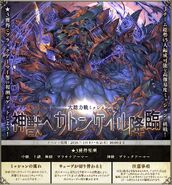 Hundred Giants' Arms Prince Illustration
Add a photo to this gallery
Retrieved from "https://aigis.fandom.com/wiki/Divine_Beast_Hecatoncheir_Advent?oldid=172657"
Community content is available under CC-BY-SA unless otherwise noted.