Saint Elyse
聖女イリス
Seijo Irisu
Profile 1
Character & Story Works 1
EnglishEnglish · JapaneseJapanese
hide profile
A healer who was called "Saint" for the staggering amount of healing power she manifests. Elyse's abundant talent allowed her to skip grades in her seminary before graduating and coming to the Royal Army to assist them. Though she was originally able to heal only wounds with her healing magic, Elyse maintained research into whether it can be used to recover from any other affliction to the health such as diseases, and recently sensed that it was having an effect. But lovesickness alone, she has no idea how to cure.
圧倒的な治癒力を発揮するために、聖女の名で呼ばれるヒーラー少女。あまりの才能に神学校を飛び級で卒業し、王国軍の力になるためやってきた。さらに本来は傷を癒やすことしかできない治癒魔法を、病などの状態異常の回復にも使えないかと研究を続け、最近は手応えを感じる。しかし恋の病だけは治療法がわからない。
BaseBase · AWAW · AW2v1AW2v1 · AW2v2AW2v2 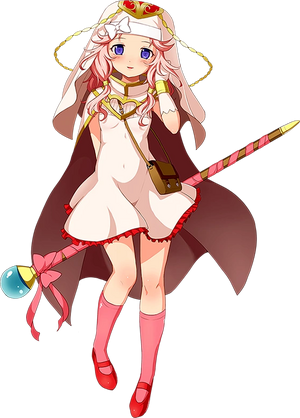 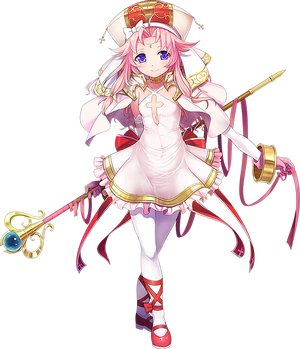 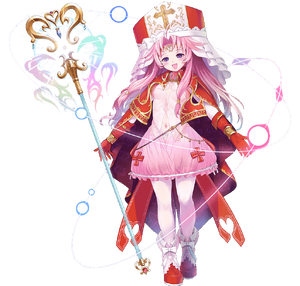 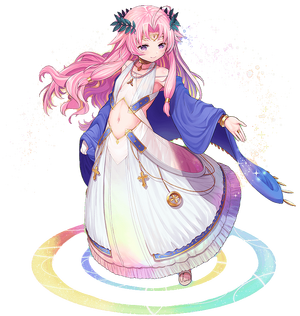 "Prince, I look forward to working with you."

Saint Elyse is a black healer.

0% Prince, I look forward to working with you.
15% Am I sick? Lately my chest has been hurting.
30% Having the Prince nearby... Somehow it makes me feel safe.
50% The reason my heart is throbbing... Do you know the real reason yet?
60% This throbbing of my heart is definitely...
80% To heal my throbbing heart... May I ask a favor?
100% Could you keep watching over me until my heart stops throbbing?
130% 王子といると、毎日ドキドキです。でも、楽しみでもあるんですよ？
150% 明日もきっと、いっぱいドキドキさせてくださいね。
Adjutant Alone with the Prince... Uuu... my heart's throbbing so much.

When I saw Elyse and called out to her, she raised her voice in surprise.

'What's wrong?' I ask. After some hesitation, Elyse finally opens her mouth.

Elyse: "Well, umm, I was just thinking about going to the Prince's room, so..."

I asked her why she wanted to see me, and Elyse placed a hand over her chest and responded.

Elyse: "Umm, recently, my heart keeps pounding... and won't settle down for some reason..."

She didn't seem that way when we were fighting, but when I looked at her, her face was serious. When I asked her when it started happening, she looked up at me.

Elyse: "I don't know why, but it pounds whenever I'm near the Prince. I can't control it... I believe I might be sick, so I came to ask you, Prince..."

I was suddenly at a loss for words by the troubled look on her face. Should I, or shouldn't I, tell her the truth? Mischief was blossoming within my upright self.

I responded, while Elyse was blushing, by telling her to come again if it still won't settle down after some time has passed.

When I asked, 'Did you figure out the cause of your pounding heart?' Elyse slowly nodded.

While she looked at me with an embarrassed smile on her face, I brushed Elyse's exposed cheek. When I dropped a kiss on her reddening cheek, Elyse's shoulders shivered.

Elyse: "Prince, you knew what was causing this pounding heart?"

While she looks up at me, I answer her question, without words, with a smile.

Did Elyse guess at my meaning? She happily smiles at me in a similar fashion.

Elyse: "Until the pounding in my heart is cured... Please be responsible and take care of me, OK?"

Elyse told me while smiling sweetly. I let out a sigh; it cannot be helped. With that, I pulled her body towards me.

Elyse: "There. All better!"

When Elyse completely healed the wound on my finger, she smiled gently.

Elyse: "Thank goodness it was a small wound. There are some flowers that have poison in their thorns."

Elyse's small hands wrap around my hand, her kindness becomes warmth and flows through me.

Elyse: "Oh? Is something the matter? Prince."

She bent her head a little to one side and asked. Did she notice my gaze?

When I told her we look just like father and daughter standing like this, her cheeks puffed up a little.

Elyse: "Even so, I'm an adult, you know? Please don't treat me like a child!"

Right when she said that, Elyse drew me towards her, and gave me a light kiss.

Elyse: "Fufu. Did I make your heart pound?"

Elyse: "It's not fair for you to always make my heart pound. So, this is payback."

Elyse turned toward me, who was astonished and at a loss for words, with a slightly precocious smile. 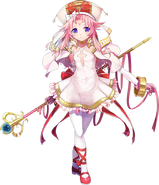 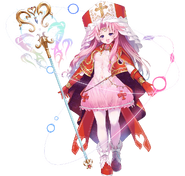 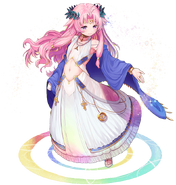 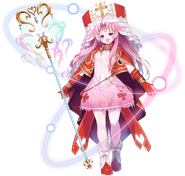 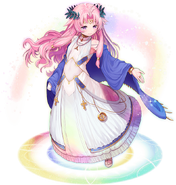 Add a photo to this gallery
Retrieved from "https://aigis.fandom.com/wiki/Elyse?oldid=190031"
Community content is available under CC-BY-SA unless otherwise noted.