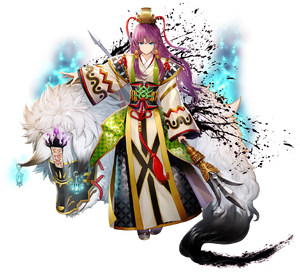 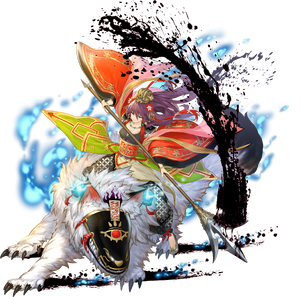 Erlang Shen is a black zhenren.

Erlang Shen (二郎神), or Erlang is a Chinese God with a third truth-seeing eye in the middle of his forehead.

Er-lang Shen may be a deified version of several semi-mythical folk heroes who help regulate China's torrential floods dating variously from the Qin, Sui, and Jin dynasties. A later Buddhist source identifies him as the second son of the Northern Heavenly King Vaishravana.

His main weapon of choice is his "three-pointed, double-edged Lance" (三尖兩刃槍), a long three-pointed Spear with two cutting edges of a Saber. This Spear is powerful enough to penetrate and cleave through steel and stone like wool. Erlang wields the Divine Spear with unmatched skill and superior mastery, being an unstoppable force of destruction in battle when wielding said Spear, having slain countless Evil Gods, monstrous demonic beasts and vast, massive armies of demons & ogres with it. He is almost always accompanied by his faithful 'Howling Celestial Dog' (嘯天犬), which has the ability to viciously attack, maul and subdue Demons and evil spirits.
Wikipedia 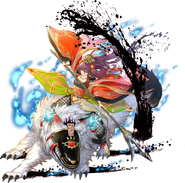 Add a photo to this gallery
Retrieved from "https://aigis.fandom.com/wiki/Erlang_Shen?oldid=151604"
Community content is available under CC-BY-SA unless otherwise noted.