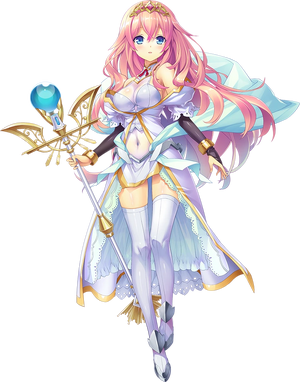 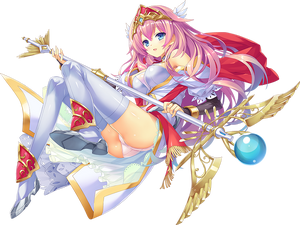 0% Ah, so you are the prince, yes? You certainly seem as kind as the rumors make you out to be.
15% H-How a-about some tea? Oh, no, I can make it!
30% The outside world is so big and full of strange things I've never seen before.
50% Right in front of the Prince... Aww... It's too strong this time.
60% Looking at it this way, my way of thinking was so small.
80% I felt very worried the first time I saw the world, but not when I saw you, my Prince.
100% I want to share both worries and joy with you from now on, my Prince...
Adjutant Welcome back, my Prince. How about some freshly brewed tea?

In Norse mythology, Lævateinn is a weapon mentioned in the Poetic Edda poem Fjölsvinnsmál. The name Lævateinn does not appear in the original manuscript reading, but is an emendation from Hævateinn made by Sophus Bugge and others. The amended name Lævateinn is etymologically considered to be a kenning for a sword (Old Norse "damage twig"). Late 19th and early 20th century scholar Henry Adams Bellows translates Lævateinn as 'wounding wand'.
Wikipedia