Imperial Sealing Swordswoman Forte
帝国封印剣士フォルテ
Teikoku Fūin Ken-shi Forute
Profile 3
Character & Story Works 3
EnglishEnglish · JapaneseJapanese
hide profile
An Imperial swordswoman who was dispatched to the Kingdom under the Imperial Marshal Leora's instructions as their compensation for cooperating in the fight against a Majin. Although she lacks emotions, she tries to faithfully obey her orders to understand the Prince better. Her own existence is a top military secret, and she keeps any details regarding the power within the sealed sword she wields to herself. She thinks of Solare, the Imperial God Tree's Envoy, as her most cherished friend.
魔神との戦いで協力してもらった見返りにと帝国元帥レオラの指示で王国に派兵された帝国の女剣士。感情が乏しく、王子のことを理解せよという命令を忠実に守ろうとする。存在自体が軍事機密であり、自分のことも手にする封印剣の力についても詳しくは語らない。友人となった帝国神樹使いソラーレを大切に思っている。
BaseBase · AWAW 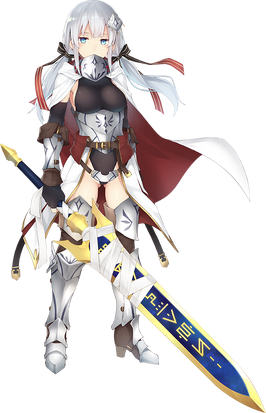 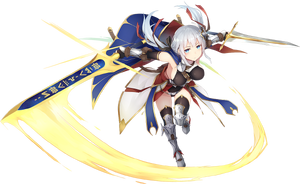 "As thanks for your cooperation the other day, Forte was dispatched."

0% As thanks for your cooperation the other day, Forte was dispatched.
15% Marshal Leora has ordered Forte to understand the Prince better.
30% Is the Prince fighting against Demons or Youkai? If that is so, Forte can be of help.
50% Is Forte slowly understanding the Prince better?
60% Forte has friends...Cherished friends...
80% Forte does not want the Prince to forget about her...
100% Trying to understand the Prince, gives Forte's chest a sort of...tingly feeling.
Adjutant Prince, if you don't tell Forte your orders, Forte won't know what to do.

Blutgang was the weapon of the legendary Germanic hero Háma. Háma (Old English: Hāma), Heimir (Old Norse), or Heime (German) appears in the Anglo-Saxon poems Beowulf and Widsith, in the Scandinavian Þiðrekssaga and in German epics such as Alpharts Tod.
Wikipedia

Art by the original artist (七原冬雪)
Add a photo to this gallery
Retrieved from "https://aigis.fandom.com/wiki/Forte?oldid=158309"
Community content is available under CC-BY-SA unless otherwise noted.