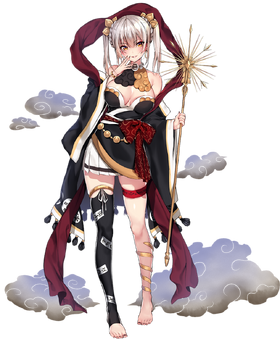 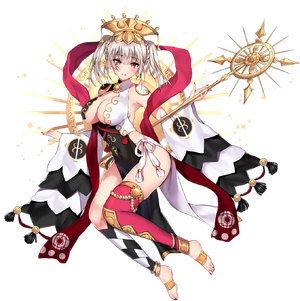 "Fufufu, no need to be so cautious. We're allies from now on."

0% Fufufu, no need to be so cautious. We're allies from now on.
15% I've lost all fondness for the Evil Hermits. Only you can satisfy me now.
30% Ahh...Prince...I love you sooo much. Hurry up and become mine already.
50% Fuu...tonight's meal was delicious as well♪ As expected, I can't get enough of this meat~
60% Only the strongest survive in this world. That's why I have to become stronger than anyone else.
80% Still...still not enough. I want Prince's everything...all of it...to be mine alone~
100% I'm glad to have crossed paths with you. Let's both continue to improve ourselves forever.
Adjutant Ahh, Prince...I missed you so. Let's get to improving ourselves right now♪

In Chinese mythology she is originally known as Leizi, the goddess of thunder. In "Investiture of the Gods", she is one of the ten evil hermits of the Jie Taoism sect led by Tongtian Jiaozhu supporting king Zhou.
Leizi JP wikipedia

During the war, she set up the Jin-Guang Formation (referenced as Jin-Guang Sheng-Pu's ability) which captures the ki of heaven and earth, stealing the light of sun and moon. It is a set of mirrors (referenced as clone tokens) which when activated will summon a powerful golden light beam bouncing between the mirrors to instantly kill any Xian who got trapped inside the formation.
Jin-Guang Formation Chinese source 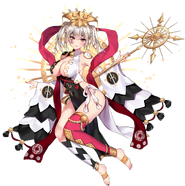 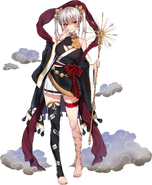 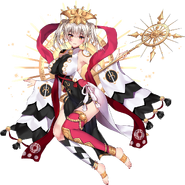 Fanart by original artist MATARO
Add a photo to this gallery
Retrieved from "https://aigis.fandom.com/wiki/Jin-Guang_Sheng-Pu?oldid=166530"
Community content is available under CC-BY-SA unless otherwise noted.