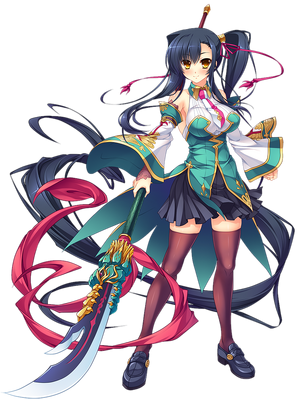 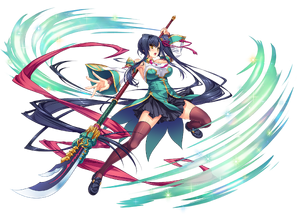 Kan'u is a black general (Koihime).

A tachi (太刀) was a type of traditionally made Japanese sword (nihonto) worn by the samurai class of feudal Japan. Tachi and katana generally differ in length, degree of curvature, and how they were worn when sheathed, the latter depending on the location of the mei, or signature, on the tang. The tachi style of swords preceded the development of the katana, which was not mentioned by name until near the end of the twelfth century; tachi are known to have been made in the Kotō period, ranging from 900 to 1596.

The Green Dragon Crescent Blade (Chinese: 青龍偃月刀) is a legendary weapon wielded by the Chinese general Guan Yu in the 14th-century historical novel Romance of the Three Kingdoms. It is a guandao, a type of traditional Chinese weapon.

It is also sometimes referred to as the Frost Fair Blade (冷艷鋸), from the idea that during a battle in the snow, the blade continuously had blood on it; the blood froze and made a layer of frost on the blade. 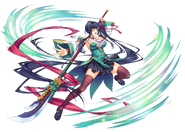 Add a photo to this gallery
Retrieved from "https://aigis.fandom.com/wiki/Kan%27u?oldid=157285"
Community content is available under CC-BY-SA unless otherwise noted.