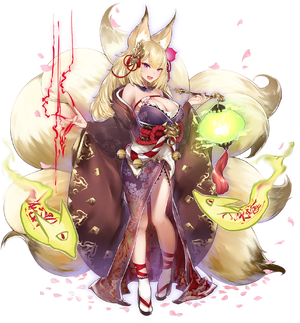 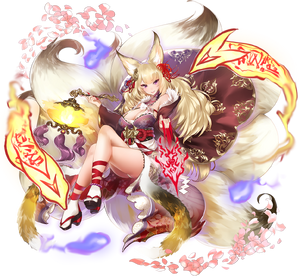 0% We has't ample time. Doth keepeth us entertained, eh?
15% We detest boredom. We have lived for millennia, after all.
30% Astonishingly, human men aren't yond lacking valor.
50% Can thee draweth out our own full power, we wonder?
60% We has't never did imagine yond one person, much less a human sir, couldst interest me this much.
80% We has't hath lived a much longeth'r life, but anon both mine own heart and mine own corse art yours alone.
100% We shall have thee payeth dearly for making me falleth in loveth with thee, well now?
Adjutant There is nothing here to spendeth time with. Couldst thee hie up and giveth us orders?

Kayou: "Hoh. Why am I your ally...?"
When I asked for her reason, she responded like she found something amusing.
Kayou: "Why? I changed into a human, and was wandering about, but when you've lived as long as I have, things'll start to get boring."
Kayou: "At that time, I heard the rumors about you. I thought you sounded interesting. Enough to pass a little time."
Smiling wryly at her carefree answer, Kayou stares at me.
Kayou: "Yes, but seeing the real thing certainly made me come to like you further. Rest easy. I'll clear away the enemy neat and tidy."
Kayou: "I'll defeat all those regarded as enemies."
That instant, a cold shiver ran down my spine. I was at a loss for words from that chilling atmosphere—her killing intent.
When I stood there silent at the killing intent that could hardly be concealed, she laughed with a chortle.
Kayou: "Kuhahah! I'm not going to eat you. However, I joined you."
Kayou: "As such, there'll be trouble if you fail to amuse me."
While twirling the pipe around in her hand, she laughed as she let out a purr.

Kayou: "About my past...?"
When I asked that, she withdrew her gaze slightly.
Kayou: "In the old days, I was working some mischief in the human world. I received the brunt of hostility from the humans."
Kayou: "I didn't particularly care all that much, but I got careless one day, and was sealed by a human."
With a bored expression, she started to tell me the rest as she groomed her tail.
Kayou: "I don't know why, but I am now currently split into another existence like this."
Kayou: "I don't understand the reason it happened, but—well—I'm living freely as I am."
As soon as I asked what kind of person was the one who sealed a Youko of her caliber, her hands stopped.
Kayou: "That's... a secret."
Like a child that enjoys mischief, she smiled at me with a grin.
Did she guess that I felt pent-up emotions in my heart? Kayou exploded into laughter.
Kayou: "Kuhahah! Don't worry. I see no one but you now."
She approached me, and then pointed a finger at my chest.
Kayou: "The sin for captivating me is heavy, you know? Prince-dono."
When I didn't say anything to that bewitching smile, she narrowed her eyes like she enjoyed it.

A Youko is a type of youkai with the characteristics of a fox.
Source

In the story told by Hokusai, formed in the Edo period, the nine-tail fox first appeared in China and possessed Daji, concubine of Shang dynasty's last ruler King Zhou. She enchanted the king and brought upon a reign of terror that led to a rebellion that ended the Shang dynasty. The fox spirit fled to Magadha of Tianzhu (ancient India) and became Lady Kayō (華陽夫人), concubine of the crown prince Banzoku (班足太子; based on Indian tales of Kalmashapada the man-eater), causing him to cut off the heads of 1000 men. It was then defeated again, and fled the country. Around 780 BC, the same fox returned to China was said to have possessed Bao Si, concubine of the Zhou dynasty King You. It was again chased away by human military forces.

The fox stayed quiet for some period. Then she appeared in Japan as Tamamo-no-Mae, the most favoured courtesan of Emperor Toba.
Wikipedia 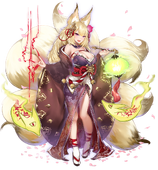 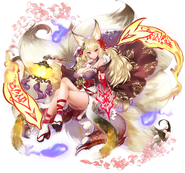 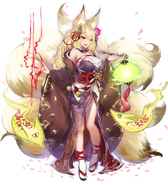 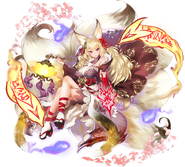