Start a Wiki
Shutendouji's Daughter Kibahime
酒呑童子の娘鬼刃姫
Shutendōji no Musume Kibahime
Profile 3
Character & Story Works 3
EnglishEnglish · JapaneseJapanese
hide profile
Although she is the leader of the Kibashu ninja corps, her true identity is that of the oni Ibaraki Douji. Although she did battle against the Prince's army a number of times with her prided Kanabou, it was for the sake of obtaining the power to rebel against her father, Shuten Douji, who had her imprisoned like a caged bird. Now, in order to defeat her father, she is borrowing the Prince's power, and seeks to forge a new relationship between humans and oni.
忍者集団鬼刃衆の頭目だが、正体は鬼の茨木童子である。 自慢の金棒で何度か王子軍と戦ったが、それは籠の烏のように自分を閉じ込めていた父、酒呑童子に反逆する力をつけるためだった。今は父を討つために王子たちの力を借りておリ、鬼と人との新しい関係を築くことを目標としている。
BaseBase · AWAW · AW2v1AW2v1 · AW2v2AW2v2 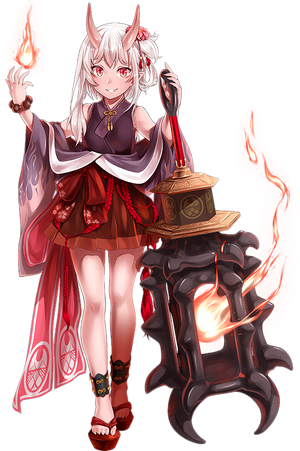 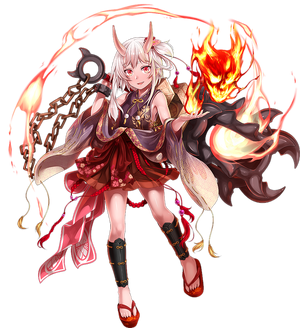 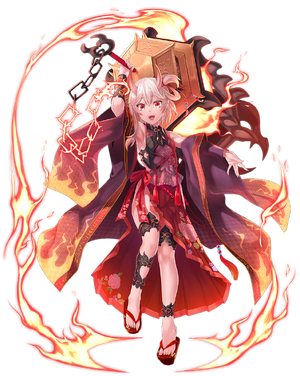 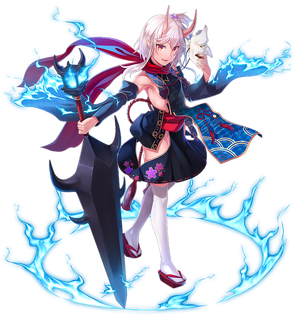 0% Fate certainly is strange, making me into the Prince's ally.
15% I believe I should apologize for all the trouble that the Kibashū caused until now.
30% A human's hand is much warmer than I thought.
50% Offending an oni is really scary, okay? Hey, stop rubbing my head!
60% Jeez, I told you to stop... Touching my horns as you please isn't allowed.
80% Hey. Do my horns... not scare you?
100% You are the first human I've ever loved. I will always protect you.
Adjutant What should we do today, Prince? Could we take a walk together once in a while?

Oni (鬼) are a kind of yōkai from Japanese folklore, variously translated as demons, devils, ogres, or trolls. They are popular characters in Japanese art, literature and theatre.

Depictions of oni vary widely but usually portray them as hideous, gigantic ogre-like creatures with sharp claws, wild hair, and two long horns growing from their heads. They are humanoid for the most part, but occasionally, they are shown with unnatural features such as odd numbers of eyes or extra fingers and toes. Their skin may be any number of colors, but red and blue are particularly common.
Wikipedia

Shuten-dōji (酒呑童子, also sometimes called 酒顛童子, 酒天童子, or 朱点童子) is a mythical oni leader who lived in Mt. Ooe (大江山) of Tamba Province or Mt. Ooe (大枝) on the boundary between Kyoto and Tamba in Japan. It has been often said that Shuten-doji was the strongest oni of Japan, who, along with the white-faced golden-furred nine-tailed fox Tamamo-no-mae, and Emperor Sutoku who became a Daitengu as a result of resentment, are called one of the “three great evil yokai.”
Wikipedia

Ibaraki dōji (茨木童子 or 茨城童子 "Ibaraki child") is an oni (demon or ogre) featured in tales of the Heian period. In the tales, Ibaraki-dōji is based on Mount Ōoe, and once went on a rampage in Kyoto. The "Ibaraki" in his name may refer to Ibaraki, Osaka; "dōji" means "child", but in this context is a demon offspring. Ibaraki Dōji was the most important servant of Shuten-dōji.
Wikipedia

The Buddhist rosary is known in Japan as a nenju or alternatively, a juzu. (sometimes o-juzu). Nenju refers to 'beads used for mindful practice', and juzu translates as 'counting beads' (tally-beads).
Source

Myouou (明王, Myōō) is the name for the the third type of deity after buddhas and Bodhisattvas in Vajrayana Buddhism. The Sanskrit name literally translates as "knowledge king", thus the Chinese character "明", meaning knowledgeable (and/or bright) is used, leading to wide array of alternative English names including "Radiant King", among others like "Guardian King".
Wikipedia 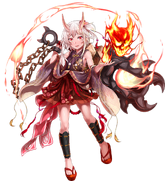 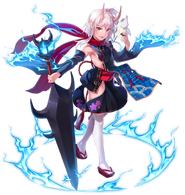 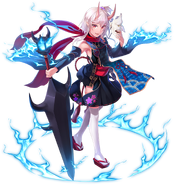 Fanart by original artist It 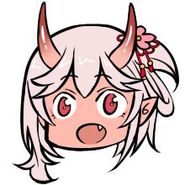 Fanart by original artist It
Add a photo to this gallery
Retrieved from "https://aigis.fandom.com/wiki/Kibahime?oldid=158925"
Community content is available under CC-BY-SA unless otherwise noted.