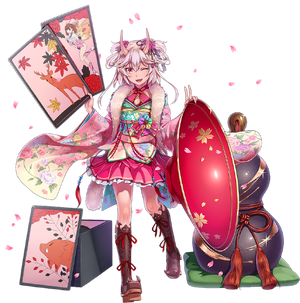 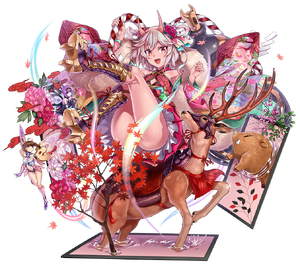 Kibahime was agonizing over something while lying on the sofa in the staff room.

Right when I was about to point out she's going to wrinkle her beautiful kimono, she...

While she says that, she sits up and...

Once again, she began to moan.

I cocked my head, wondering what in the world she's agonising over so soon into the new year, and Kibahime responds as if she caught my expression.

Kibahime: "The day after tomorrow, I was going to celebrate the New Year with Kibashuu by having a giant Hanafuda competition, but..."

Kibahime: "Ah, yes. We're using extremely heavy and gigantic Hanafuda while we play games during the new year to double as training!"

Kibahime: "It's not like I hate regular Karuta, but I'm still an Oni, you see, so these ones better suit my style."

Kibahime: "Every year, giant Hanafuda dance wildly in space as we drink and party."

So Kibashuu were doing that sort of stuff...?

While thinking about how that does sound kinda fun, I prompt Kibahime to continue speaking.

Kibahime: "This year, I also intend to win, of course, but what's troubling me is I have no practice partners."

Kibahime: "If I practice with Kibashuu, that would be showing my hand when it comes to tactics, so..."

Kibahime: "There isn't anyone in the Kingdom that's knowledgeable about Hanafuda, right? There's hardly enough time for any of them to learn now."

——So she was worried about that?

At first, she was building a wall even against me, but for her to be opening up to the point she's sharing such trivial worries is...

Suddenly, Kibahime deftly stands up from the sofa and begins to trot towards me with blithe steps.

Kibahime: "I think you have the face of a gambler that won't let the prey he's targeted escape, Prince."

Kibahime: "C'mon, Prince. If it's you, I believe you could learn the rules of Hanafuda like a fish to water...!!"

In other words, Kibahime has chosen me as her Hanafuda training partner?

I don't know about having a gambler's face, but there's something honestly exciting about amusing myself by playing cards with Kibahime."

Kibahime: "I'm gonna make you show me your full potential!"

And so we began to amuse ourselves in a game using excessively gigantic Hanafuda...

——Late at night in the staff room.

We popped out for the festival celebrating the new year being held below the castle, and made it back to the royal castle.

Kibahime: "Never would've imagined us going out to a festival like this back when we were at odds with one another, eh?"

Kibahime softens her gaze at the redness of the bonfire as she peeps through the window, smiling as if deeply moved by it.

Kibahime: "For an Oni like me to be working with humans——the Prince. To be honest, it doesn't make a lick of sense, does it?"

——You really think so?

Kibahime has become quite unreserved with her comrades, I couldn't imagine being without her in the Kingdom now.

Nevertheless, does this mean she's still harbouring ill feelings inside herself?

Kibahime: "I have much confidence in you Prince, and—of course—I trust all my comrades."

Kibahime: "The same goes for Kibashuu. He gets ahead of himself from time to time, but that's also surely because he's thinking about me and everyone..."

Kibahime: "But, you see, there's still something that makes me itch."

Kibahime: "Is it really alright for us to be friendly like this? To be frank, I wonder if everyone's actually scared of me, you know? Like..."

It's certainly true that prejudice between the different races cannot be wiped out completely.

It's possible those who'll cast heartless words may appear in the future.

It would be in the same vein as if I were to join the army of another race and them giving me no small number of strange looks.

Kibahime: "I've been getting along with everyone in the Kingdom, so even if there are some who are scared of me, I already know enough to tell them not to worry about me."

When I think about that, I also don't have time to be standing idle; there are things I need to put my heart and soul into."

Kibahime: "So that's why I've been trying to get into human fashion."

I feel like the sombre mood that lasted until a moment ago is beginning to change into a light and fluffy one like the abrupt change in mood during the giant Hanafuda competition the other day.

Kibahime: "Recently, this sort of kimono, that combines the designs of both the Kingdom and East Country, seems to be fashionable."

Now that she mentions it, Kibahime's kimono, that has taken on the characteristics of both countries, is certainly something I've never seen before.

It's not just cute, it has a certain freshness to it.

However, I never heard anything about this sort of garment being in fashion......

Kibahime: "Fufu, it's of my own design!"

Kibahime puffs up her chest full of confidence.

I see, since it's of her own design, there's certainly something fashionable about it.

Kibahime: "Like with the East Country and Kingdom, I think humans and Oni will slowly, but steadily, become friends in this way."

Kibahime: "Well, that's what I hope will happen."

Kibahime shimmies her sleeves and does a twirl before me like she's asking 'what do you think?'

Coupled with the aloof mood that's typical of her, it's like she's beautifully painting a new year that's more gorgeous than any that has come before.

Kibahime: "Eheheh, if you praise me so unreservedly, I'm gonna blush, you know?"

While Kibahime's cheeks flush red, she furtively moves her body to embrace me.

Kibahime: "I'll always be by the Prince's side."

A future where human and Oni walk together. While thinking how that would be a wonderful thing, I continued to gently embrace Kibahime."

Hatsumōde (初詣 hatsumōde) is the first Shinto shrine visit of the Japanese New Year. Many visit on the first, second, or third day of the year as most are off work on those days. Generally, wishes for the new year are made, new omamori (charms or amulets) are bought, and the old ones are returned to the shrine so they can be burned.
Wikipedia

Apotropaic magic (from Greek apotrepein "to ward off" from apo- "away" and trepein "to turn") is a type of magic intended to turn away harm or evil influences, as in deflecting misfortune or averting the evil eye.
Wikipedia

Inoshikachou is a Hanafuda card combination found under the Koi-Koi ruleset. The term is a combination of the following animal names: boar (inoshishi), deer (shika), and butterfly (chou).
Wikipedia 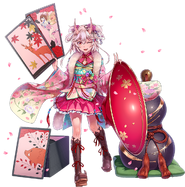 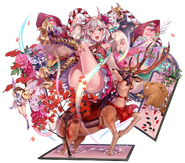 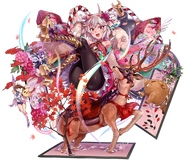 Add a photo to this gallery
Retrieved from "https://aigis.fandom.com/wiki/Kibahime_(New_Year%27s)?oldid=167631"
Community content is available under CC-BY-SA unless otherwise noted.