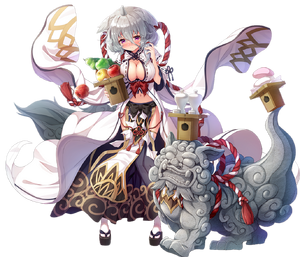 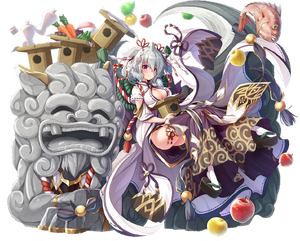 Komainu Koma is a black komainu.

Komainu (狛犬), often called lion-dogs in English, are statue pairs of lion-like creatures either guarding the entrance or the honden, or inner shrine of many Japanese Shinto shrines or kept inside the inner shrine itself, where they are not visible to the public. Meant to ward off evil spirits, modern komainu statues usually are almost identical, but one has the mouth open, the other closed (however, exceptions exist, where both komainu have their mouth either open or closed.). The two forms are called a-gyō (阿形, lit. "a" shape) and un-gyō (吽形, lit. "un" shape) or referred to collectively as a-un.

During the early Heian period (ninth century), the tradition changed and the two statues started to be different and be called differently. One had its mouth open and was called shishi (獅子, lion) because, as before, it resembled that animal. The other had its mouth closed, looked rather like a dog, was called komainu, or "Goguryeo dog", and sometimes had a single horn on its head. Gradually the animals returned to be identical, but for their mouths, and ended up being called both komainu.
Wikipedia 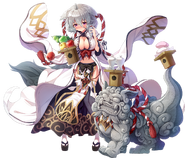 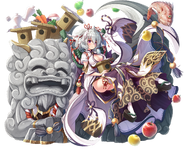 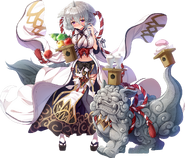