Edit
Lilia
リリア
Riria
Profile 1
Character & Story Works 1
EnglishEnglish · JapaneseJapanese
hide profile
In a country divided into the east and west, Lilia is the Princess who governs the eastern region. She has a distant familial relation to the Prince, and in fact has the Holy Blade Excalibur that the Hero King wielded in the previous Millennium War in her possession. The sword had been bestowed to the woman the Hero King chose as his wife; in the present, it fell on Lilia to be its custodian. She gets along well with Sherry, the princess of the neighboring western country, and each frequently visits the other.
東西に別れた国で、東の国を治めるプリンセス。王子とも遠縁の親戚筋で、かつての千年戦争で英雄王が振るった神剣エクスカリバーを所有している。それは英雄王の選んだ正妻に贈られたもので、今はリリアが預かる形となっている。隣の西の国のプリンセスであるシェリーとは仲が良く、お互い頻繁に行き来していた。
BaseBase · AWAW 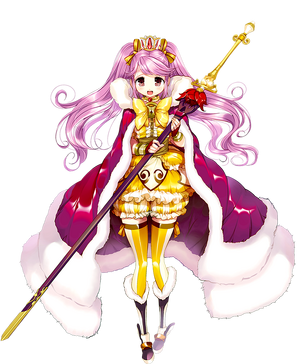 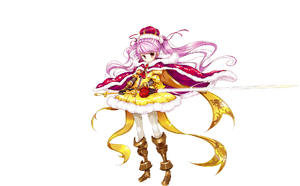 Lilia is a platinum princess.

Distantly related to the Prince.

'Excalibur' or 'Caliburn' is the legendary sword of King Arthur, sometimes attributed with magical powers or associated with the rightful sovereignty of Great Britain. Sometimes Excalibur and the Sword in the Stone (the proof of Arthur's lineage) are said to be the same weapon, but in most versions they are considered separate. Its blade was so bright it blinded the wielder's enemies. Its scabbard was also magical, and prevented the wounds received by the wielder from bleeding.
Wikipedia 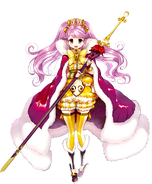