Imperial Majin Chief Mephisto
帝国魔神団長メフィスト
Teikoku Majin Danchō Mefisuto
Profile 3
Character & Story Works 3
EnglishEnglish · JapaneseJapanese
hide profile
A Majin with teal-colored hair who controls the Empire's dark army composed of demons. Her raison d'être is to pursue the truths of the world. For that reason, she lives not only in Makai, but also amongst the humans in the material world and currently resides within the Empire as a base. However, considering the influence a Majin has in one area, she tries to spend a lot of her pastime outside the Empire, sometimes paying the Kingdom a visit. She and Lapis, the great demon summoner, are old friends.
魔物で構成される帝国の黒の軍団を束ねる蒼髪の魔神。真理を追い求めることを生きがいとし、そのために魔界だけでなく人間の住む物質界にも拠点を必要として帝国に身を寄せた。だが魔神が一つ所に留まる影響を考慮し、多くの時を帝国の外で過ごすように努めており、王国にも出向する。大悪魔召喚士ラピスとは旧知の間柄。
BaseBase · AWAW · AW2v1AW2v1 · AW2v2AW2v2 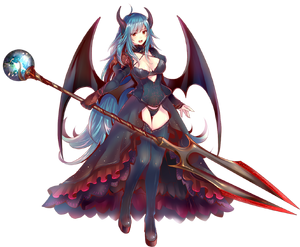 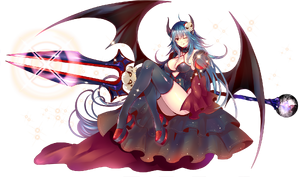 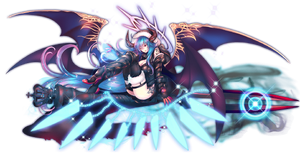 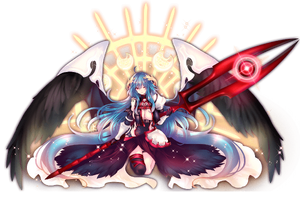 0% It is barbaric to obtain everything with might. Allow me to test your intellect.
15% I have no interest in a materialistic world. Tell me more stories, Prince.
30% To learn your hobbies and preferences, allow me to check your bookshelf.
50% Hmm...you are quite a bibliophile. I am impressed.
60% I think I now understand why the Emperor came to like you.
80% This feeling...what on earth is it? My chest tightens when I think of you.
100% Can I be by your side a little longer...? I want to know more about you.
Adjutant You need my wisdom, right? Fufu, I will teach you anything.

Mephistopheles (Mephisto) is a demon featured in German folklore. He originally appeared in literature as the demon in the Faust legend, and he has since appeared in other works as a stock character.
Wikipedia

Walpurgis Night is the English translation of Walpurgisnacht [valˈpʊʁɡɪsˌnaχt], one of the Dutch and German names for the night of 30 April, so called because it is the eve of the feast day of Saint Walpurga, an 8th-century abbess in Francia. In Germanic folklore, Walpurgisnacht, also called Hexennacht (Dutch: heksennacht), literally "Witches' Night", is believed to be the night of a witches' meeting on the Brocken, the highest peak in the Harz Mountains, a range of wooded hills in central Germany between the rivers Weser and Elbe.
Wikipedia 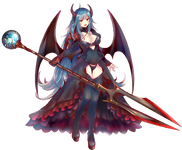 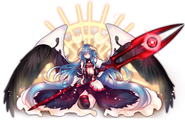 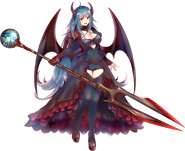 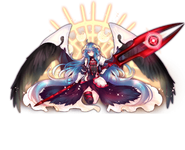 Add a photo to this gallery
Retrieved from "https://aigis.fandom.com/wiki/Mephisto?oldid=192776"
Community content is available under CC-BY-SA unless otherwise noted.