The first cutscene of the game, the Prologue is the first thing viewed the moment a new account is started. Upon the complete viewing of the introductory backstory for the game, the first story mission, Escape the Capital, will automatically start, and players will begin the tutorial for the game.

It should be noted that the Prologue can only be viewed once per account and the only way to view it again is to start a new account. 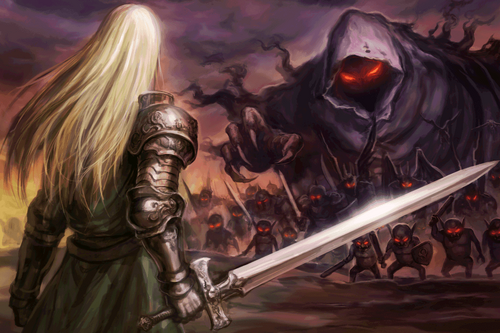 Long, long ago...
There was a never-ending battle between humans and monsters.

Foul creatures --filthy monsters-- assaulted and devoured humans.
Surely this could only bring about the fall of mankind.

Ceaselessly, the monsters continued to appear, even as humans beat back tens of thousands of them.

Exhausted, and facing a world that held nothing but ruin, mankind fell into despair.

However... one man, even in the midst of such despair, never ceased slaying monsters,
never ceased reclaiming the future.

The Goddess Aigis saw a future in this man and protected him; gave him the strength to wipe out evil.

With the Goddess' protection, the man obliterated a multitude of monsters.

In him, the people found hope. They came to call him a hero.

As this hero cut down countless monsters, he discovered the source of their endless proliferation.
The Demon King --that was what they called it.

The Demon King needed to bury the hero that discovered him,
and unleashed his legions of beasts and dark mages with power far greater than even the monsters.

But the hero killed every last one, and finally reached the feet of the Demon King.

The epic final battle between Hero and Demon King, Good and Evil, was savage in the extreme, but in the end, the hero's --mankind's-- strength surpassed that of the evil, and the Demon King's head flew through the air.

...The battle between mankind and monsters was finished.
Just as everyone believed such to be true, monsters poured out from the Demon King's flesh.

The Demon King --continuing to release his minions even in death--
made the hero, who believed in mankind's future and fought as their only hope,
fear there was no way to escape the curse of destruction and alter the course of history.

At that very moment, the goddess Aigis appeared and told him that the filth had abated with the death of the Demon King, but that alone was not enough.

The hero asked what he should do, and the goddess smiled in return.

At once, the Demon King's flesh --and the monsters themselves-- were sucked into the goddess.
The goddess had sealed Evil away inside herself with her own body.

And thus the dark, tumultuous chapter of history that would come to be called the "Millennium War" saw its end...

Evil had been sealed away by the goddess, and the people began to hope that the hero who had taken back the future for the world of men would become a king to lead them.

However the hero did not believe himself to be of kingly caliber;
he was nothing more than the man who slayed the Demon King.

Confessing that the goddess had truly staved off their destruction, he became a recluse.

The people built a large, solitary shrine for their hero --a shrine to deify the goddess Aigis.

They summoned the hero to the shrine, and said this:

"Did not the goddess Aigis seal the evil inside her body in order to entrust the future of the world of men to you?"

The hero, moved by their words, resolved to be their king.

In that instant, the clever ruler they called "The Hero King" was born. 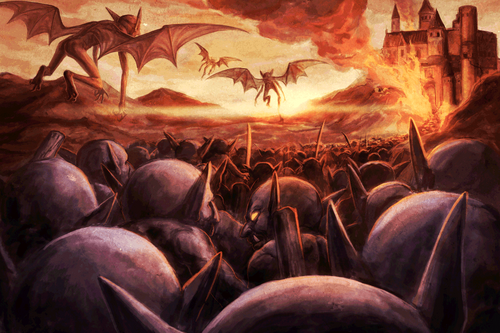 Months and years passed since that hero became king, and we arrive now at the present.

The hero and his descendants are content, but the shadow of ruin once again creeps into this prosperous world.

A swarm of monsters suddenly appears, like those that live only in his legends.

That could only mean the seal the goddess put on her body had been broken.

The evil sealed within her body had acquired a singular might.
Having defiled her flesh, this new evil gave rise to even stronger monsters.

They overran the kingdom that worshiped her, killing men and violating women.

At last, the monsters' hunt reached the king, he of the hero's legacy.

The people --having lost all means of opposing the evil horde-- feared the night, which fed the forces of evil.
They could do naught but panic.

And so they prayed,

"Goddess Aigis, help us this once, please --somehow..."

And so it was, that a new "Millennium War" began...