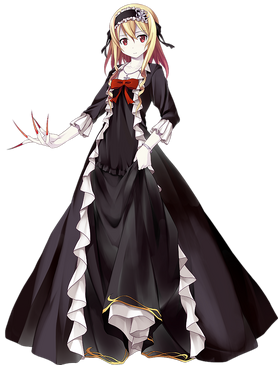 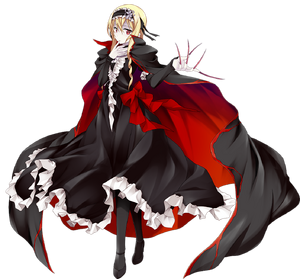 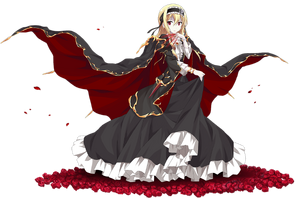 "My name is Racua. I'm the one who connects both humans and vampires."

0% My name is Racua. I'm the one who connects both humans and vampires.
15% Humans and vampires' coexistence, I'll definitely make it a reality.
30% My blood-sucking impulses are under control. This body still craves for blood, though...
50% Weak, short-lived, and foolish. That's what makes humans delicious.
60% If I were to suck blood now...It'd probably be from the one I love, I guess?
80% Nobody's ever imagined living an eternity, alone. Isn't that right?
100% Prince, I give you these words. Indeed, these are the words of love.
130% 予の心算を解するようになったか。ふふ……実に愛い奴よ。
150% 予が王子の言葉を欲するように、王子もまた、予を――。
Adjutant Please give me your orders. If it's from you, I don't mind following them.

Carmilla is a Gothic novella by Irish author Joseph Sheridan Le Fanu and one of the early works of vampire fiction, predating Bram Stoker's Dracula (1897) by 26 years. Carmilla had nocturnal habits, but was not confined to the darkness. She had unearthly beauty, and was able to change her form and to pass through solid walls. Her animal alter ego was a monstrous black cat, not a large dog as in Dracula.
Wikipedia 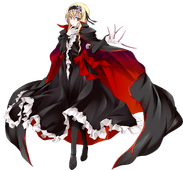 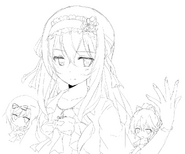 Fanart by original artist Moritan
Add a photo to this gallery
Retrieved from "https://aigis.fandom.com/wiki/Racua?oldid=168267"
Community content is available under CC-BY-SA unless otherwise noted.