Imperial Sniper Ralph
帝国狙撃兵ラルフ
Teikoku Sogekihei Rarufu
Profile 3
Character & Story Works 3
EnglishEnglish · JapaneseJapanese
hide profile
A sniper from the Imperial army. He became the leader of the sniper unit as a result of his prowess in rapid fire combat against goblins. His home was destroyed by monsters and his face was scarred during that time. His older sister was also physically and mentally damaged, and is currently recuperating at the Empire's medical institution. He feels indebted to the Empire, but has mixed feelings after learning of the existence of the 'Black Army' recruiting monsters.
帝国軍に所属する狙撃兵。ゴブリンへの速射で抜きん出た結果を出し、狙撃隊の長となった。出身国は魔物に滅ぼされてしまい、そのとき顔に傷を負った。また姉も心身ともに傷つけられ、今は帝国の医療機関で療養している。帝国には恩義を感じているが、魔物を取り込んだ「黒の軍団」の存在を知ってからは複雑な思いを抱えるように。
BaseBase · AWAW 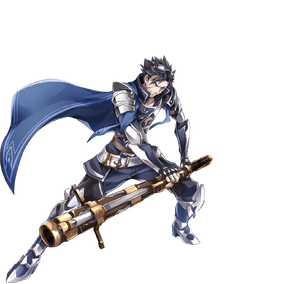 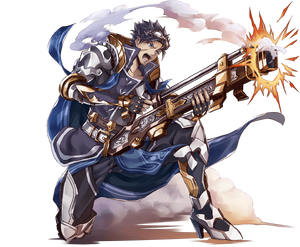 "I’m Ralph, an imperial sniper. Leave the goblins to me."

0% I’m Ralph, an imperial sniper. Leave the goblins to me.
15% Sorry, but I’m no good with formalities. ...Oh, you’re the same way?
30% The way you act doesn’t fit your position at all. Maybe we’re similar in that regard.
50% I don’t trust monsters. 'Course, the same goes for those Black Army guys.
60% ...If you believe in them, then I want to try and believe, too.
80% If only you were around back then...
100% Don’t worry. I’ll shoot down any goblins that aim for the Prince.
Adjutant What’s our next move? I’ll leave it up to you. 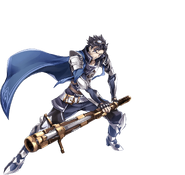 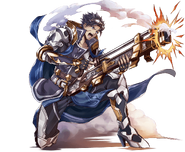 Add a photo to this gallery
Retrieved from "https://aigis.fandom.com/wiki/Ralph?oldid=154354"
Community content is available under CC-BY-SA unless otherwise noted.