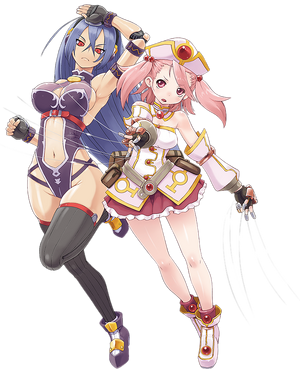 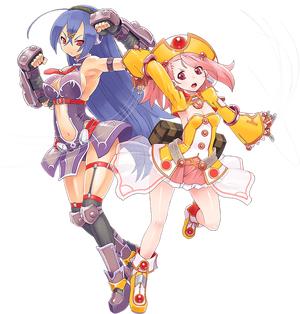 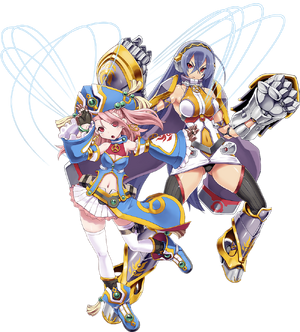 Machinist Rikka is a platinum puppeteer obtained from the Mechanical Soldiers of the Ancients event.

Rikka #1:
I hear happy humming from somewhere. When I walked towards the voice, I saw Rikka doing something with a doll.
Rikka: "Ah, Prince! Going for a walk?"
Noticing my presence, Rikka glanced my way. She spoke as she tended to her doll.


Rikka: "This girl is already like a family member to me. So I need to properly take care of her."
She makes full use of the mechanical doll as she fights, taking an active part in the heat of battle that belies her young looks.
Rikka: "My clan have been puppeteers for generations... So when I saw this girl, I couldn't bring myself to leave her."
While stroking the doll's face, Rikka smiles.
Rikka: "I would be glad if the Prince also likes this girl."
She says as she smiled at me. I responded with a nod.
The doll looked like she was happy as her hair was brushed by Rikka.

Rikka #2:
Rikka: "Prince... do you think I'm strange?"
When I asked her why she was asking me that all of a sudden, Rikka opens her mouth.
Rikka: "I... Besides the doll, I don't talk to anyone but the Prince. Do you think it's strange that I talk to dolls...?"


She asks. It seems she was alienated from others because she talked to dolls when she was little, and wasn't able to make friends.
Rikka: "Others will think the Prince is also weird by being around me, and..."
Rikka shut her mouth right when she said that much. I patted the head of Rikka's doll that was sitting next to her.
Rikka: "Prince..."
It doesn't matter what others think, I'll treasure both Rikka and the doll. When I said that, Rikka's expression brightened up.
Rikka: "I'm sure this girl will also treasure the Prince. ... I will too."
While hugging the doll, Rikka beams a smile at me.

Rikka #3:
Rikka: "Recently, it feels like this girl has started to smile more often."
Rikka said, and I turned my gaze towards the humanoid being standing right beside her.
—The wisdom of the ancient past gave birth to the 'puppet', a strange being that imitates humankind.


There was only an unchanging, impassive look etched on her beautiful and elaborate face.
Rikka: "You can't tell? This girl is smiling with a very tender look on her face, see?"
I looked at the 'puppet' closely, but I still couldn't see any change in her expression.
Rikka: "I guess I'm the only one who can tell, since I'm always working with her. ... However, this girl is growing day by day."
Rikka: "Today, this girl wanted to meet the Prince, so that's why we made a visit to your room."
I don't know too many details concerning the mechanical soldiers known as 'puppets'.
However, I was purely happy that Rikka's partner has started to regard me with affection rather than hostility.
Rikka: "But... this might just be a mirror that reflects the heart of the one that controls the 'puppet'."
Rikka turned her face downwards as if she was slightly embarrassed.
Rikka: "Although I said this girl is growing day by day, I feel like... I've also been making progress in no small way..."
If anyone saw her from the time she joined, it's clear her words are true.
I responded with a silent nod, and Rikka raised her head that was drooping and smiled happily.
Rikka: "Yes! Both I and this girl think, for the sake of protecting our friends... and for the sake of being useful to the Prince, that we want to grow much, much more!"
But... she resumed speaking quietly.
Rikka: "It wasn't just this girl who thought she wanted to meet the Prince, you know...?"
Though she was slightly embarrassed, she tried her best, and forced out a shy smile. I was totally flabbergasted by her words and cute gestures.
Rikka: "Prince... Right now, I'm smiling... Not just this girl... I, too, have become able to smile much more."
She walks up to me timidly.
When I realized it, her hands were touching my hands.
Rikka: "From now on, please let us be by your side... If it's for that, we will overcome any adversity."
The strength of her will became a light that filled her lovely round eyes.
Rikka: "Prince... From now on, please look after us..."
Gripping my hands affectionately, Rikka carefully spun those words.
The 'puppet' standing beside her, for the first time, looked like she was smiling at me. 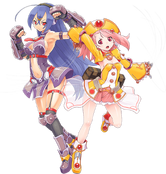 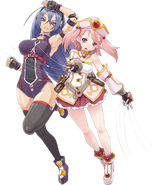 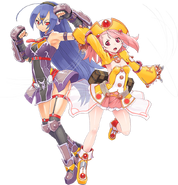 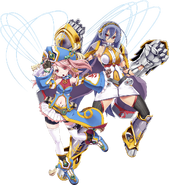