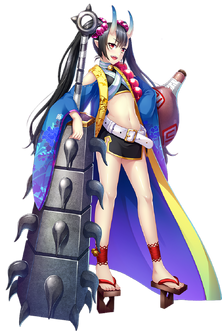 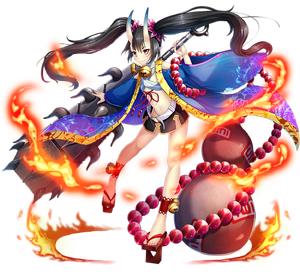 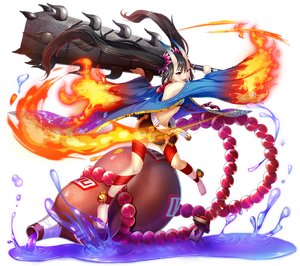 "I'll lend you my strength. That doesn't mean I trust you completely, okay?"

Blue-Horned Oni Girl Rindou is a platinum oni obtained from the Blue Oni's Daughter and the Oni Clan event.

0% I'll lend you my strength. That doesn't mean I trust you completely, okay?
15% How should I go about tricking my Kibahime... Nn?
30% I... I won't be seduced by you so easily, okay!?
50% What's inside this gourd? Hm, I guess I'll tell you.
60% Nishishi~♪ These sweets from Anna-san are delicious~♪
80% I guess humans aren't that bad... Maybe I'll befriend them?
100% Prince, you don't seem that bad, so I'll let you be my special friend~!
Adjutant What, Prince, you taking a break? How about playing with me~?

Oni (鬼) are a kind of yōkai from Japanese folklore, variously translated as demons, devils, ogres, or trolls. They are popular characters in Japanese art, literature and theatre.

Depictions of oni vary widely but usually portray them as hideous, gigantic ogre-like creatures with sharp claws, wild hair, and two long horns growing from their heads. They are humanoid for the most part, but occasionally, they are shown with unnatural features such as odd numbers of eyes or extra fingers and toes. Their skin may be any number of colors, but red and blue are particularly common.
Wikipedia

Myouou (明王, Myōō) is the name for the the third type of deity after buddhas and Bodhisattvas in Vajrayana Buddhism. The Sanskrit name literally translates as "knowledge king", thus the Chinese character "明", meaning knowledgeable (and/or bright) is used, leading to wide array of alternative English names including "Radiant King", among others like "Guardian King".
Wikipedia 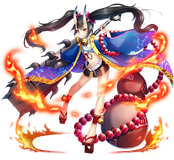 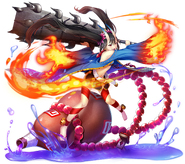 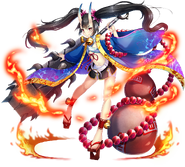 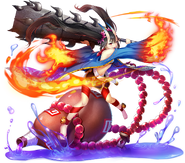 Add a photo to this gallery
Retrieved from "https://aigis.fandom.com/wiki/Rindou?oldid=129294"
Community content is available under CC-BY-SA unless otherwise noted.