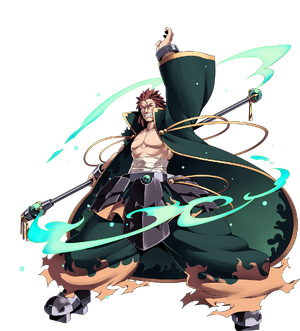 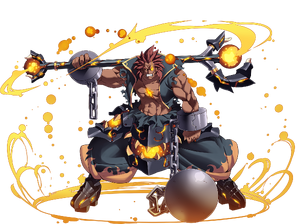 "Wounds are no problem! Leave it to me!"

Lion of Healing Robert is a gold healer.

Before Class Change (Skill level will not be retained after CC)

Quotes - Highlight the pink lines to see them. Edit

0% Wounds are no problem! Leave it to me!
15% I don't look like a healer? Mind your own business!
30% Once again you've taken on an extravagant mission.
50% No matter how dangerous the battlefield, I'll heal your wounds.
60% I'm not one to dwell on the past. The problem is the future!
80% If I'm taken down, who's going to heal our fighters' wounds?
100% I'll have to hone my skills a bit so I can protect you!
130% あんたを生き延びさせるのが、俺の使命ってやつなんだよ。
150% よし王子、これから鍛錬にいくぞ。なぁに、軽くだ軽く！
Adjutant 副官なんて柄じゃねぇが……。王子の命令なら仕方ねぇな！

Robert: "I'm a heck of a drinker, you know. Sure you can keep up, Prince?"

Robert plunked into his chair, white teeth showing behind his wide grin. With his impressive physique, at first glance he could be mistaken for an infantryman.

I was curious to talk with Robert, one of the few male healers.

Robert: "You're the Prince alright! Look at these great wines!"

Conversing cheerfully, Robert surveyed the lines of bottles. He regarded his glass of wine momentarily, then drank a mouthful, savoring it.

He drank for a while, and then suddenly posed a question.

Robert: "So how did you end up taking the fate of the world on your shoulders? I still don't quite understand. I just came along because I was invited."

True enough, I simply asked him to help defeat monsters, and provided no further explanation.

I spoke of my being the Descendant of the Hero, and of my receiving divine guidance from the goddess Aigis.

Robert: "So you're the Descendant of the Hero that I've been hearing about. That's an incredible fate in itself."

Quite a challenge, Robert said with a smile upon hearing my story.

Robert: "Why am I a healer? Hahahaha! Well, given my appearance, I can't blame you for asking!"

You wonder why he chose this path. With his physique, he could have easily become an infantryman.

Robert: "I actually did fight at first. But then I had realization. There were plenty of guys killing the enemy, but nobody to heal the injured."

Robert: "Where I was, there are a lot of damage from monsters, you know? All the men were fighting."

Robert: "But there were no healers! We were downing the enemy, but we were also suffering casualties. My comrades were dying in droves."

Apparently recalling that time, Robert grimaces and stares into distance.

Robert: "I studied intensely to learn everything I could about healing. I seemed to have a knack for it. I was able to put it into practice early on."

Robert: "But even so, it was too late. Most of the people in my village were already dead."

Robert gazes at the palms of his hands. It couldn't have been easy to learn all of that from scratch. As you listen intently, Robert suddenly bursts out laughing.

Robert: "Lose the long face, Prince! We can't change the past! The problem is what to do from here on out, am I right?"

Robert: "Anyway, don't worry about injuries and such---I'll heal them in an instant!"

Robert had said the same thing when you first met. His expression is resolute, betraying no sign that he is a prisoner to his past. 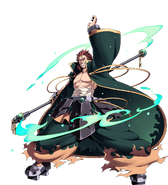 Add a photo to this gallery
Retrieved from "https://aigis.fandom.com/wiki/Robert?oldid=170075"
Community content is available under CC-BY-SA unless otherwise noted.