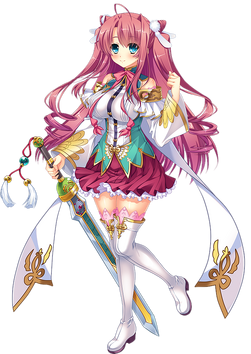 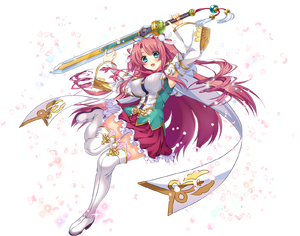 Ryuubi is a black ruler (Koihime).

The Oath of the Peach Garden (桃園三結義) is a fictional event in the historical novel Romance of the Three Kingdoms by Luo Guanzhong. This event is set at the end of the Eastern Han dynasty around the time of the Yellow Turban Rebellion in the 180s A.D. Liu Bei, Guan Yu and Zhang Fei took an oath of fraternity in a ceremony in the Peach Garden (believed to be in present-day Zhuozhou, Hebei), and became sworn brothers from then on. Their goal in taking the oath was to protect the Han Empire from the Yellow Turban rebels. The oath bound the three men, who would later play important roles in the establishment of the state of Shu Han during the Three Kingdoms period. It is also often alluded to as a symbol of fraternal loyalty.
Wikipedia

Add a photo to this gallery
Retrieved from "https://aigis.fandom.com/wiki/Ryuubi?oldid=157294"
Community content is available under CC-BY-SA unless otherwise noted.