In addition, the top 3 in each of the following categories will each receive a special episode:

If a unit wins in multiple categories, they will gain multiple special episodes. You can earn rank EXP by reading them. The units in question do not need to be owned in order to read the episodes.

In the event a Hero Unit wins, the released Chibi Unit will not possess a unit buff effect simply by being in your 1st Barracks, and their abilities will be modified from the original Hero Unit.

Also, Hero Units will not be available in the Popularity Vote Pickup Gacha.

Details About Each Reward Type[]

You can earn additional rewards corresponding to the cumulative number of tickets used during each voting period. These rewards will be distributed immediately and appear in your present box.

2 sets of revival missions will be available for a week each, from Sep 22, 2021 to Oct 7, 2021.
In addition, the 1.5x drop multiplier for Time Crystals will apply for the entire duration of the marathon. 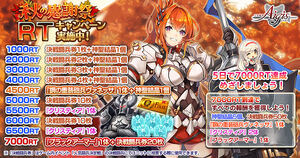 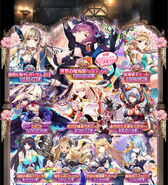