The Shrine (神殿) is one of the institutions available from the main menu. At the Shrine, players can donate to the Goddess Aigis to summon people with extraordinary prowess to fight alongside them in their upcoming battles. Aigis needs these offerings, because her body weakened after decades of imprisoning the immortal demon king and its defiling presence. Players can donate Gold to her Shrine or even better, give her crystals with sacred essence to strengthen her powers once again.

In short, this means that if players pay her gold or Sacred Crystals they receive a unit in return.

Players can pay 1 Sacred Crystal to fully restore their Charisma or Stamina.

This type of summoning is free once a day and costs 2000G for every subsequent attempt. In using this, players will primarily receive Iron and Bronze units, with a very low chance of getting higher rarities. It is not suggested to use Base Summoning en masse unless the player has plenty of gold to spare, as it is necessary for leveling and Awakening units.

Estimated probability of each rarity dropping from 25,000 trials:

With these probabilities, and assuming that every Iron/Bronze unit received is discharged, on average players will obtain a Silver or better unit for approximately every 67,000 gold spent.

This summoning costs 5 Crystal Shards. Using this type of summoning, players will typically receive Iron and Bronze units, but the chance of getting higher rarities is significantly greater than in Base Summon. Silver units are fairly common and there is a reasonably high chance of obtaining Gold and Platinum units as well.

Premium 2 might include older units that are removed from the Premium 1 pool, those units are depicted on the corresponding banner when available.

Rather than the traditional increased rates for selected units of Premium 1 and Premium 2, Pickup Summoning (ピックアップ召喚) instead limits its pool of Platinum and Black units to a small group, typically centered around a single theme. The contents of Pick-up summon pool are listed further below. The contents of the "theme" are not set, meaning one unit can show up in a different group than before.

Following the events of Seal of the Goddess, Aigis' younger sister Adamas now resides in the Shrine. At regular intervals, the Imperial Summoning will be made available, with which the player will be able to summon imperial units, and only imperial units. Like Premium Summoning, this will cost 5 SC.

As of Nov. 16th, 2017, players can obtain a guarantee of a Platinum or Black unit if certain conditions are fulfilled.

As of Nov. 16th, 2017, Premium Summoning can be used for free up to 10 times after the tutorial is completed.

Premium 2 includes depicted Rate-up Units (Banner) units even if they are not listed here.

The following units are only accessible from the Shrine during rate-ups on which they are featured units, as they have been removed from the standard pool. 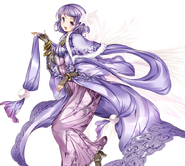