Start a Wiki
Fallen Angel Sophie
堕天使ソフィー
Datenshi Sofī
Profile 1
Character & Story Works 1
EnglishEnglish · JapaneseJapanese
hide profile
A fallen angel who was sealed for lending her powers to the humans during the millennium war. She remains conscious of her crime even after being released by the prince, always trying to punish herself. Those strong thoughts grant a healing effect to those around her. She believes that one day she will earn heaven's forgiveness and her blackened wings will return to their former pure white.
千年戦争の際に、天使でありながら人にカを貸した罪で、長らく封印されいた堕天使。王子によって解き放たれた今も罪を意識し、自るを常に罰しようとしている。その強い思いは側にいる者に、癒しの効果を与えるほどである。いつかは天の許しを得られ、黒く染まった翼がもとの純白に戻る日が来ると信じるている。
BaseBase · AWAW · AW2v1AW2v1 · AW2v2AW2v2 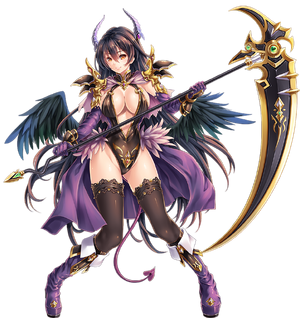 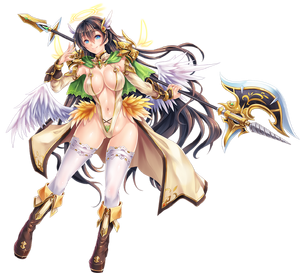 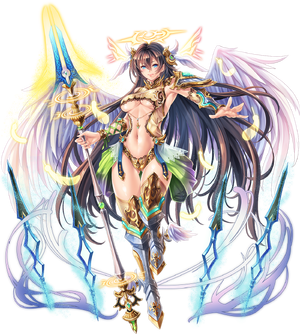 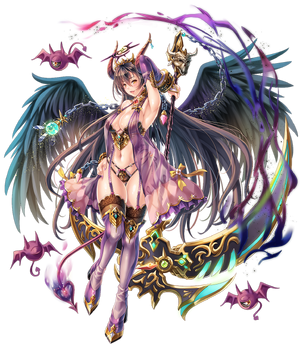 "So you are the one who freed me from the seal..."

Sophie #1:
Sophie requested that she be punished for some reason. Is she seeking penance for the sins she committed before? When I was walking today, I ran into her.
Sophie: "Prince! Thank you for your hard work."


Is it because she's a former angel? Her smile was a lovely one, like an angel's.
While I turned towards Sophie's golden eyes, she reported about today's battle.
Sophie: "I have fought with those monsters before. Their weak point is..."
Sophie began to explain in a slow tone of voice like a rolling bell.
It must've been during the Millennium War long ago. She, who allied with the humans, became a fallen angel, and had been sealed.
Sophie: "As long as we keep pressure at this point, we can secure our victory."
My heart leapt when she smiled back at me with a grin. When I caressed her neatly trimmed hair, Sophie's eyes opened in bewilderment.
Sophie: "Y, you mustn't, Prince! I am one who has sinned. I don't deserve to be gently touched by the Prince..."
Pulling back her body, Sophie hangs her head in shame.
Sophie: "Punishment suits me."
She says looking downwards. I couldn't help but wonder why she, who allied with humans, became a fallen angel as a sinner.

Sophie #2:
Did something happen to the angels in the past? The Goddess Aegis has kept silent.
However, surely she, who is standing before me now like this, remembers the scars from back then.


Sophie: "What I lost was just a small thing. However, I wanted to help the humans..."
Sophie looked at her weapon as she gave a wry smile. Her sad-looking eyes were moist with tears. But she only wanted to support the humans, so why?
Sophie: "But I have no regrets. I thought about it the whole time I had been sealed... What came to mind whenever I thought about it were the smiles of the humans."
Sophie: "I can't return to Heaven. However, there's things even I can do on the surface."
Gripping her weapon tightly, Sophie opened her eyes, and looked at me.
Sophie: "It is my fate to continue to atone for the sin of betraying Heaven until this body disappears. But until that time comes... I'll be by the Prince's side, protecting the Prince."
By the time I noticed her smile that was just like an angel's, I may have been caught by her.
I shall shoulder her sin and fight alongside her until the final moment has come. I have decided that in my heart.

Sophie #3:
Sophie: "Now that I think about it, wasn't everything I did for the sake of humans done for my own sake?"
For her, who chose the human world over even Heaven, those words contained a deep and profound metre.


Sophie: "At times, I think: 'Is my power truly useful to everyone?'"
"Of course it's useful!" I threw those words in an attempt to clear away Sophie's mind of doubts.
Sophie: "It makes me very happy to have you say that... I'm sorry... For some reason, I feel like... crying..."
Sophie smiles powerless on the verge of tears. My chest tightening to such loveliness, I firmly embraced Sophie.
No different from a human, with the fragility of a maiden, I felt warmth from within her body.
Sophie: "Prince-sama... I am thankful from the bottom of my heart to have met Prince-sama and everyone..."
Sophie: "My everything... I want it to be for this human world, and for Prince-sama..."
Sophie: "I love you, Prince-sama... Prince-sama, you are the only one I love..."
My chest heats up by the words of her confession.
—Someday, we'll part ways. However, I want to create a lot of futures with her until that day comes. Concealing those desires within me, I gently kissed her. 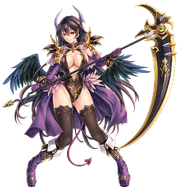 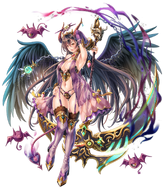 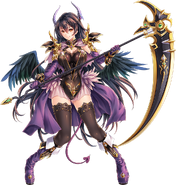 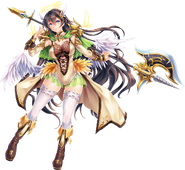 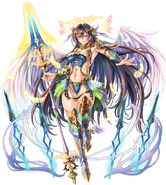 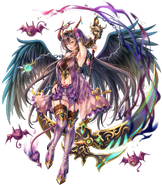 Fanart by original artist Makirin
Add a photo to this gallery
Retrieved from "https://aigis.fandom.com/wiki/Sophie?oldid=155831"
Community content is available under CC-BY-SA unless otherwise noted.