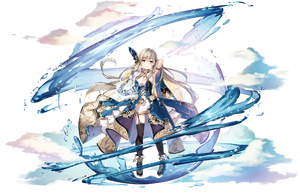 She Who Heralds the Silver Arm Tram is a platinum silver-armed legend.

Findias, also known as Finias, is one of four island cities in the Mythological Cycle of early Irish literature. When the Tuatha Dé Danann migrated to Ireland, they are said to have brought four magical instruments from these cities. From Findias came the Sword of Light (claideb/claiomh solais) which belonged to Núada.
Wikipedia

The Stone of Fál (Lia Fáil) meaning Stone of Destiny (or also "Speaking Stone" to account for its oracular legend) is a stone at the Inauguration Mound (Irish: an Forrad) on the Hill of Tara in County Meath, Ireland, which served as the coronation stone for the High Kings of Ireland. It is also known as the Coronation Stone of Tara. According to legend, all of the kings of Ireland were crowned on the stone up to Muirchertach mac Ercae, c. AD 500.
Wikipedia