The plot revolves around Karma, who has been turned into a vampire; the Prince vows to cure her and enlists Vincent to advise him on his quest.

The event features high health vampires that may paralyze units, as well as high defence werewolves. The high number of serums required makes it notably difficult for players without strong teams to acquire Karma.

Players must collect serum drops from the available maps. The total number of serums determines the reward.

While Karma is available as both a Platinum rarity Vampire Princess and a Black rarity Immortal Princess, only one version will be awarded at the conclusion of the event based on the amount of serum collected (Platinum if 250-699, Black if 700+). 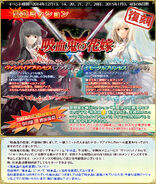 Revival Marathon 3 Banner
Add a photo to this gallery
Retrieved from "https://aigis.fandom.com/wiki/Vampire_Bride?oldid=165837"
Community content is available under CC-BY-SA unless otherwise noted.